The secret things belong unto the Lord our God 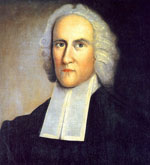 Jonathan Edwards (1703-1758) served as pastor of the Congregational church in Northampton, Massachusetts, for over 20 years. He was one of those used by God to instigate and sustain  the revival known as the First Great Awakening which began in 1740.

He became embroiled in controversy over who should partake of the Lord's Supper. Edwards said that only people who professed to be converted and who were bringing forth the fruits of conversion in their lives should be received at the Lord's Table. The Communion controversy sadly resulted in him wrongly being dismissed as minister. It is worth noting in the light of this, the following written by him.

If we find fault with God's government, we virtually suppose ourselves fit to be God's counsellors; whereas it becomes us rather, with great humility and adoration, to cry out the words of the apostle in Romans 11v33-36. Our understandings are infinitely less than of babes, in comparison with the wisdom of God. This consideration alone of the infinite distance between God and us, and between God's understanding and ours, should be enough to still and quiet us concerning all that God does, however mysterious and unintelligible to us.

Nor have we any right to expect, that God should particularly explain to us the reason for His acts. It is fit that God should not give any account of his matters to us , worms of the dust, that we may be sensible of our distance from him, and adore and submit to him in humble reverence.

We use cookies to ensure that we give you the best experience on our website. If you continue to use this site we will assume that you are happy with it.Ok